Find out how life evolved here from the mid 1800's

*First settled by Europeans around 1860 and once a settlement of timber-cutters and cattle grazers, Mudgeeraba still retains many of its original buildings and much of its old-world charm.

Back in 1856, William Duckett White, a squatter from Beaudesert, leased 25 square miles of cattle run called “Murry Jerry” from the NSW Government and part of that included the town we now know as Mudgeeraba. 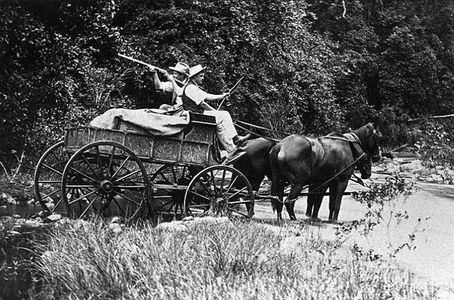 Many of the early settlers in the area were timber getters, saw millers and eventually dairy farmers and in 1871, the population of Mudgeeraba district was listed as 31. These settlers lived an isolated, hard existence and relied on the steamers and cutters which travelled up the Nerang River, six to ten miles away, for supplies and contact with the outside world.

Many of the roads probably evolved from these early timber tracks because back in 1884 there was a good deal of activity in timber hauling from Mudgeeraba to Tweed Heads. 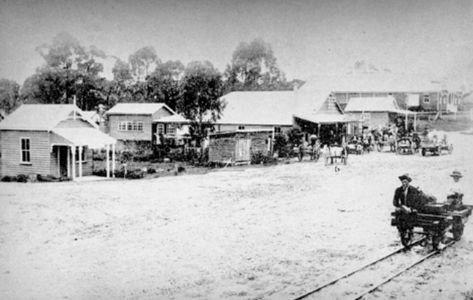 As the population grew and the road network improved, the Mudgeeraba Hotel was opened in December 1884 by William Laver, the proprietor, who advertised that the premises were only five miles from Burleigh Heads.

Ales and spirits of the best brands were available, along with good stabling and secure paddocks for the horses. The hotel was surrounded by excellent lagoons for ducks, swans and other wildlife.

Many people in fact credit the opening of this watering hole, both for horses and passengers, as the catalyst for the building of the Mudgeeraba village.

In 1896, the hotel was rebuilt as the Hampshire Terrace Hotel and Post Office facilities were established in the hotel around the same time.

During the 1890’s a Presbyterian Church (which is the present day Uniting Church) was built near the hotel and on weekdays, it became the Mudgeeraba Provisional School.  Also operating near the hotel was H. Carmichael's blacksmith's shop and around 1895, a local government hall was built just over the road from the Hotel. 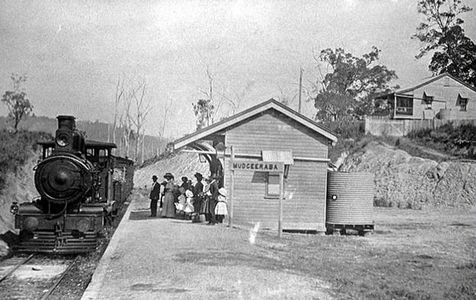 Mudgeeraba rose to some prominence with the coming of the railway from Brisbane to Tweed Heads in 1903. The station of the South Coast railway line was located near the present-day motorway entrance. The railway was closed in 1961 although the modern-day Pacific Motorway largely follows the route of the former railway. 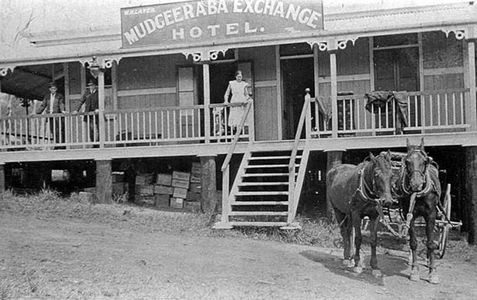 In 1914, the Laver family commissioned the building of a new hotel called the Mudgeeraba Exchange Hotel opposite the railway station. In the 1950s, the Exchange was sold and eventually renamed the Wallaby Hotel, which still remains to this day.

The township around the hotel and railway station grew to include a bakery, butcher shop, bank and, after World War I, the Mudgeeraba and Springbrook Memorial School of Arts. 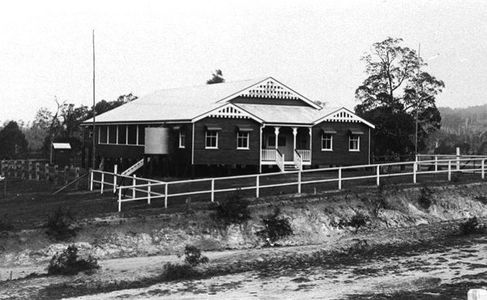 At the time of opening in 1922, the new hall was claimed to be the largest public hall in the South Coast District.

It certainly was the centre of attention on an evening in September 1936, when they switched on the first electric light in Mudgeeraba (town folk photographed at the event to the left). Mr Faine threw the switch. It connected Mudgeeraba 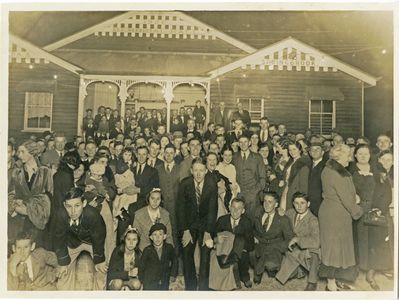 permanently with the 24-hour electricity service generated in Southport.

The Mudgeeraba Post Office building was erected in 1927 as the council chambers for the Shire of Nerang and was used for that purpose until 1949 when the Shire was amalgamated into the Shire of Albert.   This quaint heritage-listed building still stands proudly today in Railway Street, however, in modern times it has been utilised as a visitor information centre and library and is currently used as a GCCC book exchange and Gold Coast Techspace.

In the early 1930s during the Great Depression, the Upper Mudgeeraba Creek banks were the location of unemployment relief camps set up under the Income (Unemployment Relief) Tax Acts, 1930. The creek water helped sustain vegetable gardens for the residents, housed in timber and corrugated iron huts. One of the relief schemes put in place by the Queensland Government was to establish small banana plantations. In Upper Mudgeeraba.  300 acres divided into 50 blocks were made available to successful applicants to farm.

Mudgeeraba is a village largely built on the generosity of landowners. Pioneering families gave generously of their land in order to support the establishment of community places. Although originally slow to develop, Mudgeeraba today is a thriving community - a unique village with its historic urban form rich in history and in character.

In the 1970s, Mudgeeraba underwent significant residential development.  In 1973 a second licensed venue and restaurant know 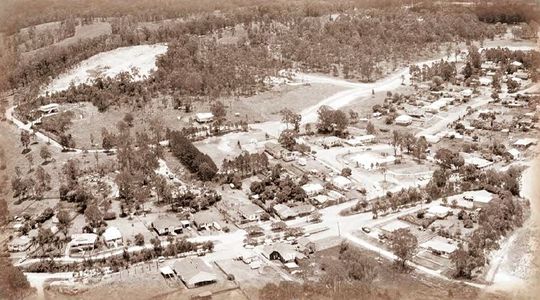 n as Woodchoppers Inn opened in Mudgeeraba in Railway Street next to the Memorial Hall and opposite the old post office.

Originally located in Palm Beach as the bowls club, the building was cut into 3 sections, moved to Mudgeeraba on the back of 3 large trucks and then re-assembled – where it still stands today.

Places of Local Significance:
Click here for more information on: